The combination of Choline and Green Tea Extract effectively keep the brain in optimal condition at all times add to that Tyrosine that is a powerful distressing ingredient.

Have you ever wondered whether there is a supplement that can make you smarter? Or at least improve your ability to focus and concentrate? The answer is ‘yes’ – Epayts’ Brain and Focus Formula contains all the ingredients to help your brain perform at its best. Each tub contains 60 capsules containing the unique formulation.

The benefits of Brain Activator’s ingredients

Brain Activator contain carefully selected ingredients of the highest quality, each of which has a specific benefit. Glutamic Acid, for example, is an amino acid used in the formation of proteins. Your body turns it into glutamate, a chemical that helps the brain’s nerve cells send and receive vital information from other cells. Scientists also believe that it has a role to play in learning and memory.

Choline is another key ingredient of Brain Activator and one which is an essential ingredient for brain health. Choline is needed to make acetylcholine, a neurotransmitter that has a vital role in the regulation of memory, emotions, and intelligence. Choline is also required for DNA synthesis which is a key part of brain function and growth.

N-Acetyl L-tyrosine, also known as Tyrosine, is another amino acid that is found in many dietary supplements. Tyrosine is used to make noradrenaline and dopamine, and seems to lessen the amount of stress experienced after exposure to traumatic and stressful situations and is believed to be helpful in the prevention of stress-induced memory deficits. GABA or Gamma-aminobutyric acid is another naturally occurring amino acid that operates like a brain neurotransmitter or a sort of chemical messenger. GABA is regarded as an inhibitory neurotransmitter as it impedes specific brain signals and reduces activity in your nervous system – good for reducing stress and anxiety. Docosahexaenoic acid (DHA) is crucial for the development of the brain in babies and children. DHA is also needed for the maintenance of adult brain function, especially the ability to learn and retain new knowledge. Luckily, Brain Activator contains plenty of DHA.

Huperzine A, an alkaloid compound, has many brain benefits, such as protecting against toxic organophosphates; protecting neurons against glutamate toxicity; protecting the brain from oxidative damage; aiding recovery after a traumatic brain injury; mitigating the symptoms of Alzheimer’s and Parkinson’s; and helping to limit brain damage after severe bacterial infections.

Brain Activator also contains many other ingredients derived from natural products. Bilberry Fruit Extract, for example, contains antioxidants that fight the free radicals responsible for the symptoms of ageing, such as memory loss. Grape Seed Extract is known to reduce cognitive decline and generally support your brain as it ages. Olive Leaf Extract helps to protect the brain and central nervous system from the effects of stroke and conditions such as Alzheimer’s. It is believed to do this by reducing inflammation and lessening the harm resulting from oxidative stress. Cinnamon Bark Extract is metabolized into sodium benzoate so taking cinnamon bark extract significantly raises the amount of sodium benzoate in your brain. A recent study demonstrated that sodium benzoate has many positive effects on brain function and that cinnamon bark extract may offer protection against several neurological diseases.

Green Tea Extract is believed to boost the cognitive functions of your brain, particularly your working memory. It is also packed with antioxidants that can benefit the body as a whole. Bacopa Extract is a plant used in traditional Ayurvedic medicine for millennia. Bacopa is commonly used to alleviate the symptoms of Alzheimer’s disease, as well as treating anxiety and attention deficit-hyperactivity disorder (ADHD).

Keep your brain in optimal condition. Brain Activator is the supplement you need to safeguard your cognitive function and overall brain health. 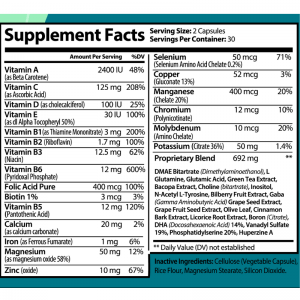